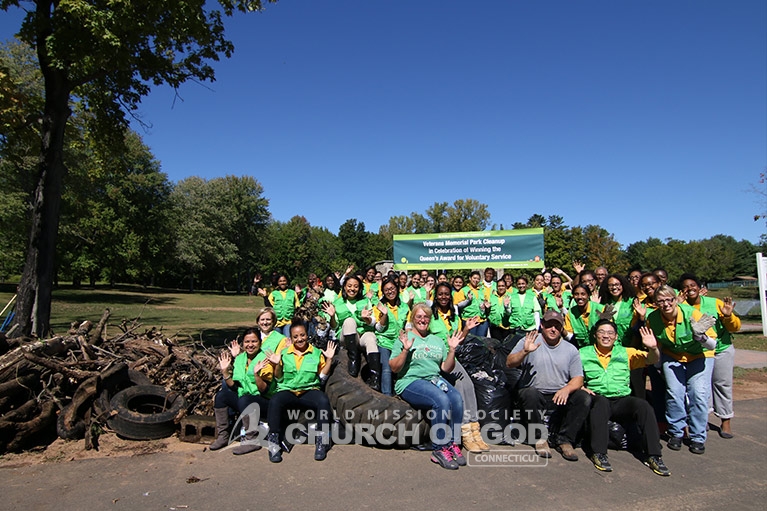 In the early morning of September 25, 2016, more than 50 volunteers from the Church of God in Middletown gathered to prepare for the Veterans Memorial Park cleanup. The cleanup effort was part of the East Coast Volunteer Service Day 2016. Twenty-five locations on the East Coast, Puerto Rico, and the Caribbean carried out volunteer activities —part of a multi-state public awareness campaign emphasizing the importance of volunteerism.

“Veterans Memorial Park is an important resource for our neighborhood,” said Karen Gubbins, a Church of God volunteer. “We hope that by giving a helping hand, we’ll be able to contribute towards enhancing the historic landscape of the park. This is so everyone in the community can enjoy it peacefully.”

The Church of God volunteers canvassed every inch of the park. They cleaned playgrounds and parking lots and even watered the trees along the memorial path. Once they finished cleaning the park, the volunteers put on their waders. And then, they jumped into the river and began cleaning out the garbage and debris. The volunteers found rusted car parts, used bottles, dead trees and industrial tires to mention a few.

To help out with the cause, the Park Division of Middletown provided the volunteers with rubber gloves, trash bags, and a dumpster truck.

Park Manager Sheila Poitras said, “I’ve never seen anyone so excited to see a dump truck! We get help maybe once or twice a year, but never this much. Especially in such a short amount of time. It’s crazy!”

Upon successful completion of the event, Park Superintendent Brian Young remarked, “I didn’t realize what a mess it was until I saw the pile! I thank everybody for their hard work. We really appreciate it. The city appreciates it too! Really nice job!”

This past summer, the Church of God received the Queen’s Award for Voluntary Service Award. As recipients of the highest volunteerism award in the U.K., motivated volunteers around the world strive to serve their local communities even more. As a result, the Middletown volunteers were inspired to carry out to the Veterans Memorial Park cleanup to continue the trend of servitude.