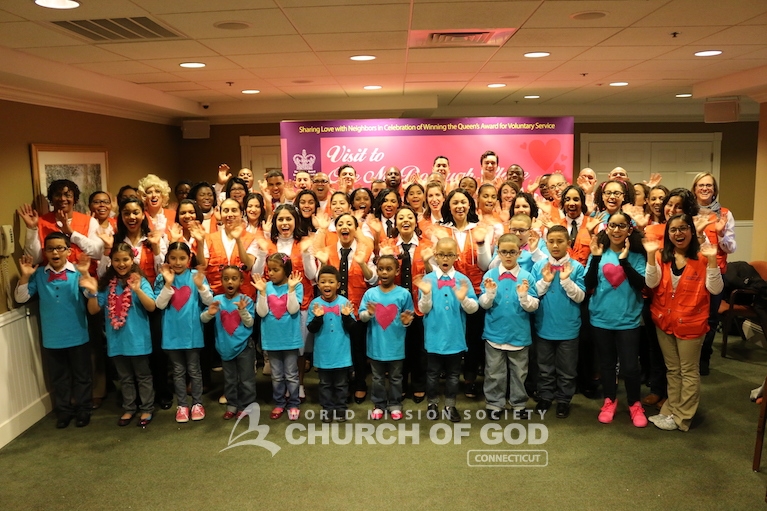 On January 22, 2017, the World Mission Society Church of God visited One MacDonough Place, a local assisted living facility. The volunteers went to cheer up the seniors by sharing joy and happiness with the heart of Heavenly Mother. With the Church of God in Middletown located only a few blocks away from One MacDonough Place, the volunteers decided to put the teachings of Christ into practice like good Samaritans by crossing the street to reach out to their neighbors and comfort them.

The volunteers kicked things off with a special message: “Scientists have said that laughter can be the best medicine. So we hope you get a lot of medicine today!” Still, the residents were not aware of how much laughter there would really be going forward. The volunteers put on several performances that were a thrilling and nostalgic blast from the past. The whole room erupted with laughter once dancers began to perform “The Twist” by Chubby Checker. Meanwhile, volunteers honored the residents with flower necklaces during the song. Some residents even began singing and dancing with the music. Church members also put on a hysterically comical skit for the residents. “We’ve been laughing so hard, I can still feel it in my cheeks!” said a caretaker at the side of an ecstatic resident.

Church of God volunteers putting on a hilarious skit for the residents at One MacDonough Place.

Additionally, a collection of moving songs performed by the children were especially moving. A flood of fond memories was evident through the tears rolling down the faces of the seniors. The performances culminated in a united choir with all volunteers singing an original Church of God New Song, titled, “Fill Our Hearts with Love.”

At the end of the event, one of the residents exclaimed, “It was very exciting! We had entertainers here before, but nothing like this. This has been my favorite because we never had anything like this.”

Despite a large age difference between residents and volunteers, godly love united everyone. Through the time spent together, all participants were deeply touched. They were also overjoyed that such a joyous relationship could be established in their community. The volunteers expressed enthusiasm as they anticipate sharing love with their neighbors through continued community service activities.

In 2016, the Church of God received the Queen’s Award for Voluntary Service–the most prestigious award for volunteerism in the U.K. This award is acknowledged by 53 member states of the Commonwealth of the British Empire. Furthermore, Queen Elizabeth II approved and signed the award.

Nevertheless, as 2016 was such an eventful year, Church members are now looking forward to what will happen in 2017. Like small streams that form a river, the One MacDonough Place senior citizen visit is just one of many volunteer activities the Church of God will carry out this year. The members hope these events will collectively result in even bigger and better things for our global and local communities.