Volunteering at the 2017 Winter Special Olympics 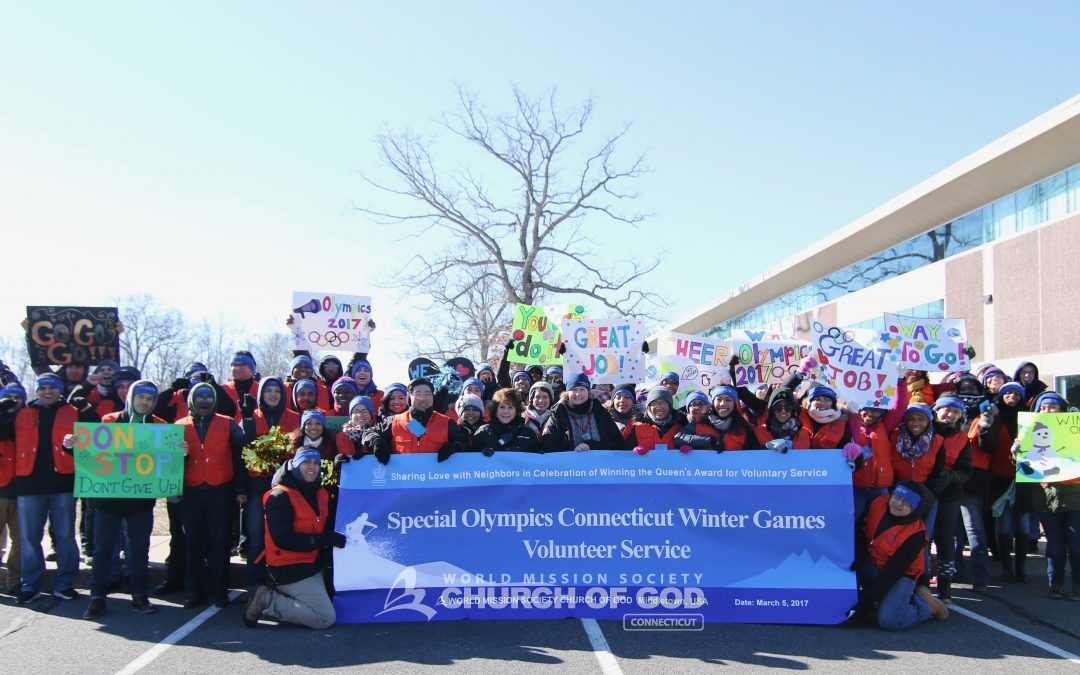 In the early morning of Sunday, March 5, 2017, about 70 volunteers from the World Mission Society Church of God awoke to the amazing news that it was 15 degrees outside! The reason for the volunteers’ excitement was the certainty that the Connecticut Winter Special Olympics would not be canceled, and they could join in supporting the Winter Games as they had planned for the weeks leading up to the event. Just a few days earlier, the Connecticut Special Olympics organizers had expressed concern that they might have to cancel the event for the first time ever because of the unusually warm weather, topping 60 degrees. However, the temperature dropped and the Church of God volunteers bundled up in snow boots, winter coats and bright orange vests as they headed to the Winter Games.

Katie York, director of volunteer services for the Special Olympics of Connecticut, immediately greeted volunteers with hugs because of her excitement. The volunteer turnout was less than expected, so Katie was overjoyed when she saw the 70 Church of God volunteers. Katie explained, “I don’t know if the cold kept them away or what happened, but just the fact that you guys are here is going to enable us to really do all the jobs we need to do that we really didn’t have the numbers for just 20 minutes ago. We were a little worried, so we’re just so happy to have you guys here.” Eversource Volunteer Manager Gina echoed Katie’s relief, “Praise God for sending you guys to us, that’s what I say.”

Volunteers cheered on all athletes to try their best.

The Church of God volunteers were eager to begin and formed teams to provide one-on-one time with the athletes, escort them to the competition areas, time the races, serve lunch, and encourage everyone through unified cheers and family support. Furthermore, the volunteers organized a mix of celebration and relaxation in the Olympic Village. Athletes and their families could get out of the cold after their events to join the warmth of dancing, ping-pong, arcade-style basketball, and companionship with the Church of God volunteers.

“Your energy is great and you can see how happy you make the athletes, and how excited they are,” remarked Donna, an Eversource event coordinator.  “We wouldn’t have been able to pull this off without having you guys here. I mean, you’re escorting athletes and dancing with them, so if we didn’t have you it just wouldn’t have been the success that it is.” The athletes even began to recognize the orange vests as a sign of comfort, calling all volunteers with orange vests “their friends” and “their biggest fans.”

From the Snowshoe Relay Races to the Cross-Country Skiing events, curious spectators asked the volunteers how many family members they had in the Winter Games, and the answer, “Zero,” seemed to surprise them.

By the completion of the Winter Games, the Special Olympics of Connecticut Director Katie York shared how she felt working with the Church of God volunteers for the first time, “I feel tremendous right now, the event was a huge success largely in part to the World Mission Society Church of God being here. With the volunteer service that was provided, we were able to hold the event despite the bitter cold, and the fact that we had so many other volunteers who made the commitment but didn’t show up. So, I am thrilled . . . It was a tremendous day and I am just so happy to be around such happy people.”

John O’Toole, community relations lead at Eversource, also shared, “I felt wonderful, it was a blessing. I know the fans standing next to me at the finish line found your genuine excitement and love for what you’re doing contagious. And you could even see it down to the last race today that the athletes really enjoyed your company and your cheer and enthusiasm. You were a blessing to have with us today. It was wonderful!”

The Church of God has ongoing plans to continue efforts to share Mother’s love with the world through volunteer activities. The volunteers were thankful to participate and formed new friendships with athletes and their families along with other members of the community. Contact us to learn more about volunteering with the Church of God.

Each athlete felt the love and support from Church of God volunteers.

A Church of God volunteer assists an athlete of the 2017 Winter Special Olympics.